No, not me. Another Wendy. A Wendy who’s a ski legend and bona fide piece of US ski history.

Wendall Cram, otherwise known as Wendy, passed away this past weekend at the age of 97 at his home in Manchester, Vermont.

Maybe I feel a connection with Wendy because his name is the same as mine. And because he lived in Vermont. And because he loved to both ski and bike (so many similarities!). But truly, he was one of a kind.

Wendy was present at the creation of lift-served skiing in the United States. He was one of the first skiers to get hauled up Gilbert’s Hill in Woodstock, VT, where the first rope tow was installed in 1934. He went on to become a member of the 1940 US Olympic Team, although the Olympics were cancelled due to World War II (his Olympic sweater hangs in the Vermont Ski & Snowboard Museum). Instead, he joined the 10th Mountain Division in Camp Hale, Colorado, and ended up as an instructor in this elite force. Because of a serious back injury, however, he was never deployed to fight in Europe. (For more about the 10th, see my blog post here.)

After the war, Wendy became an instructor at the glamorous Sun Valley Resort, where he taught his share of movie stars and struck up a friendship with Warren Miller, who was then living in an unheated trailer next door. He still raced, winning the Diamond Sun downhill at Sun Valley, a course with no control gates or padding on the lift towers or trees. He then moved back east and opened a ski shop in Manchester, VT, which he ran with his wife, Annie, until the late 70’s. And for more than fifty years, he worked as an instructor at Stratton.

I met Wendy a few years ago when he was tooling around Manchester on his specially built tricycle. He loved biking, and told me he’d take 60 or 70 mile rides during the week, 30 milers on the weekend. Here I am with Wendy and his bike: Two Wendy’s: Me and Wendy Cram

Manchester even named a bike path after him: If there’s a ski paradise, you can be sure that Wendy is there right now, happily laying down tracks in some heavenly powder.  RIP, Wendy. 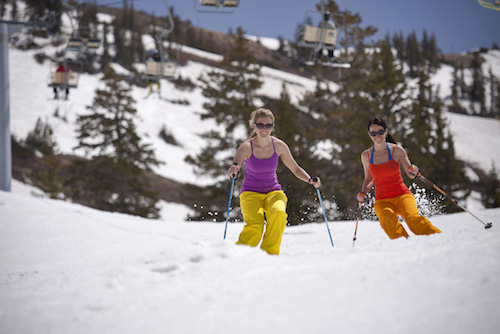 Learning to board: Yes, really, I gave it a try.