Plan to be passing through Ishpeming, Michigan, soon?

In case you didn’t know, that’s the location of the US Ski and Snowboard Hall of Fame. Yeah, I agree; the Upper Peninsula of Michigan seems an unlikely spot to me, too. You’d imagine the Hall of Fame would be someplace like Aspen or Vail. Or even Stowe, Vermont. But once you learn the reason, you can understand why it’s there: Over a century ago, a group of local businessmen and ski enthusiasts founded the National Skiing Association, thus earning the city the distinction of being the birthplace of organized skiing in the US.

The Hall of Fame Museum has been around since 1956, showcasing not only the members of the US Ski Hall of Fame, but memorabilia of particular interest to skiers.

Now it’s home to something else, too: the first-ever exhibit featuring Women in Snowsports.

I wrote about the dearth of women Hall of Famer’s a few months ago (you can read the entire post here). In a nutshell, there aren’t nearly enough. Out of 410 inductees, there are only 60 women. Yes, you read that right. Sixty. That’s 15%.

There are a lot of reasons why, which you can read about in the post. But instead of getting sidetracked, let’s focus on the positive: The exhibit.

One of the primary movers behind it is Jeannie Thoren — yes, she of the famed Thoren Theory, which introduced a revolutionary concept to skiing: Women are not small men, and may actually have different requirements for ski gear. So she’s pretty inspiring. And yes, she’s a  2014 Hall of Fame inductee.

I recently asked Jeannie about the Women in Snowsports exhibit at the museum.

SD: How did this exhibit come about? What was the impetus behind it?
JT: Women have always been virtually invisible in skiing.  The exhibit is a way to recognize and put a spotlight on women who have achieved at the highest level. Hopefully, it’ll be inspirational to all visitors, but especially to young girls and their mothers.  I want them to start dreaming big.

I was inducted into the Ski Hall of Fame last September. The organization was in the midst of hiring Justin Koski, an Ishpeming native, to take over the position of Executive Director. During the course of the weekend, I told him of my longtime idea to get all the women members gathered in one section of the museum. There are a smaller number of women members, and I wanted to unite them so they’d be a real presence. He was enthusiastic in his support.

My grandparents were born outside of Ishpeming. The first place I ever skied was in Ishpeming. I have been going to the museum, starting with the older location, since I was kid. Later, in the present building, I never miss a chance to stop in and look around. I’m sure my idea was well received because I am a “local” and have known management for as long as I can remember.

Being inducted into the Ski Hall of Fame was my lifetime goal. I started out in Ishpeming, and after traveling all over the world for skiing, I was finally back home. Assembling this Women in Snowsports exhibit is my way of giving back to the skiing community where it all began for me.

SD: So what does the exhibit include?
JT: To get the ball rolling, the items were decided between the outgoing Executive Director, Tom West, the new Executive Director, Justin Koski, and myself. There is also a Display Committee and a Board of Directors, who have final say on what goes in and what isn’t appropriate. I guess in a way I’m the curator from a distance, but all the credit goes to Ann Schroeder, the Ski Hall’s Secretary. She has the task of making sure everything is labeled and documented.

The cornerstone of the exhibit is a mock-up of Jeannie Thoren’s Women Ski Center. This was the first exclusively women’s ski equipment shop anywhere in the world. It lives on today as Outdoor Divas in Lionshead, Vail.

On top is the copper sign I had over my Women’s Ski Center in Lionshead at Vail. The black shadow box contains a signed pair of the Dynastar Exclusive Carves. They were named SKI Magazine’s Ski of the Year in 2007, when I was Dynastar’s Women’s Category Manager. Below that is the framed SKI Magazine article outlining the features which made this truly a winning women’s specific ski. And below that is a fun explanation of the Thoren Theory, outlining some of my on-snow experiences doing clinics from Lake Placid to Mt. Bachelor. All this is flanked by my two latest, state-of-the-art skis which are currently on the market [ed. note: these are custom made by SkiLogik]. The Edelweiss, the stiffer of the two, is on the left, and the friendlier Snowflake is on the right.

Next to it is a ski rack with a pair of my Blizzard Women’s Test L skis, and the end result, the first women’s specific ski, Blizzard’s Fame, with documentation on the project.

It’s a shared space with existing exhibits that have been there for years and can’t be moved.  There’s a gondola, three lift chairs, a T-bar, and so on.  There’s also a large platform with mannequins dressed for skiing in styles representing the 30’s, 40’s, 50’s, and 60’s.  And there’s also a  large life-sized photo booth of a skier jumping off a cliff; this is Genia Fuller, a 2015 Hall of Fame inductee.  You just put your head in the hole provided to be the skier.

SD: Is this now a permanent part of the museum? How often will it be updated?
JT: Yes, it’s permanent and will be updated on an ongoing basis. It will never be done. Right now it’s a diamond in the rough, but we’re making progress. My ongoing job is to contact women in the Hall of Fame to see if they have memorabilia they can send us. I have a couple of women I’m working with at present. 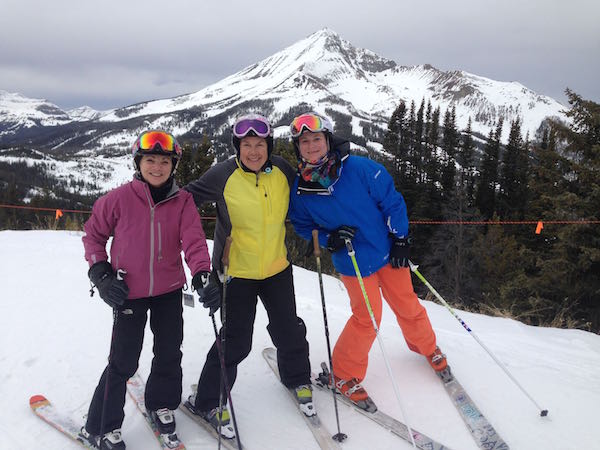 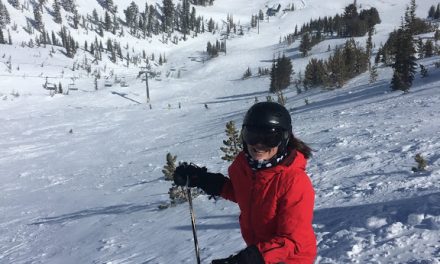 Skiing with Confidence: A Transcript of Ski Diva’s Talk at the Boston Ski & Snowboard Expo