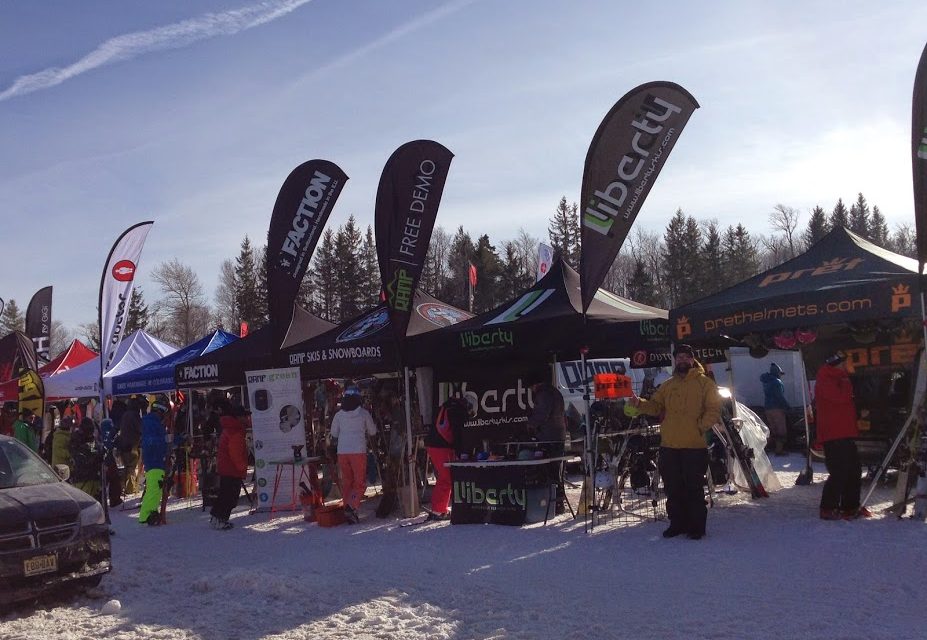 It’s a dirty job, but someone has to do it. This week I spent a couple days at the Ski Industry Demo Days at Stratton, VT, to preview the 2010 skis.

I absolutely love the Demo Days. Manufacturers set up tents filled with their new equipment, and the lucky participants have three days to try them out, talk to the reps, and learn more about next season’s skis. Truly, I felt like a the proverbial kid in a candy store! So many skis to try, so little time.

Two overall impressions, however: First, there didn’t seem to be a lot of new models this year. I don’t know if it’s the economy or what, but manufacturers seem to be more focused on refining their current skis, such as upping the waist size, or giving them new graphics. I guess it’s a less expensive way to freshen their product line. Second, I’d say that the manufacturers have really stepped up their graphics. There are some stunning skis out there for next season!

So here’s what I saw and tried. I didn’t take as copious notes as I did last year, with the stats for each ski. This year I was much more casual (read “lazy”). So for what it’s worth, here goes:

Volkl doesn’t have any new models coming out next year. However, they’re introducing a new technology called “Bio-Logic,” which they claim puts a female skier in a more neutral stance. According to the rep I spoke with, traditional bindings have the heels jacked up. When you combine that with the higher ramp angle you typically find in a woman’s boots, you end up being tipped too far forward.This can actually cause you to crouch, pushing the calf forward and really working the quads. (It’s like doing wall sits all day; your quads end up killing you.) To combat this, Volkl has raised the toe in the binding. The result is better balance of the hamstring and glutes and more efficient muscle use. They’ve also tapered the tail angle so it releases more readily at the end of a turn. The tip is a bit wider, and they gave the ski a more consistent flex pattern.

The only new model they have for the coming year is the Estrella (not sure of the spelling), which they say is suited for aspiring intermediates. I didn’t try it, but I re-tried the Aurora, Tierra, and yes, the much loved Aura. Yes, I am still in love with the Aurora. What a ski! If I were in the market, this is the one I would buy. It feels like a Cadillac under foot: smooth, stable, and strong with that great Volkl edge. A terrific all around ski (too stiff for the bumps, though). As for the Aura, they’ve changed the graphics once again. Actually, they’re very similar to this year’s, except in a different color scheme (a silvery gray background and not as much color). I think I like this year’s better.

The new women’s ski from Atomic is the Double Deck. And it’s really lovely: a white topsheet surrounding a raised black area, all covered with thin silver hatch marks. It’s really elegant. If you went to a black-tie ski event, this is the ski you’d bring. The technology sounds way cool, too: Simply described, it has two decks which are essentially one ski on top of another. Although the two skis are produced separately and joined together, each can move freely. The lower deck (adapter deck) adjusts to the slope while the upper deck (control deck) distributes the power generated by the skier.

Sounds great, right? Well, no. I found them very, very heavy, extremely torsionally stiff, and unresponsive. Perhaps they just need a bigger, stronger skier. A man I know tried the men’s version and loved it, so maybe it’s me.

Atomic still has the Heaven’s Gate and the Cloud series. I didn’t demo any of these this year, though last year I really liked the Cloud 9’s when I skied them last year. 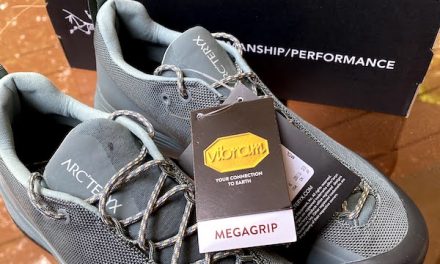