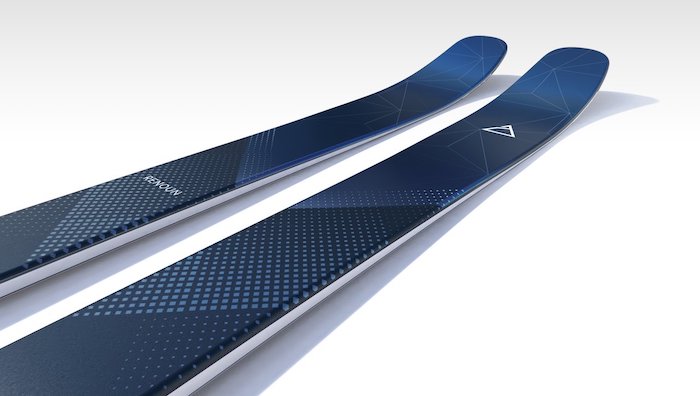 Last week was Diva East, where members of the Ski Diva community gather at an eastern ski resort — in this case Sunday River — to get to know one another in person (we had a western gathering at the end of January, too). Some of the women who came I’d met before, and it was a joy to see them again. But some had never been to a Diva event, and it was fun to make new friends, too. All in all, a fantastic time. 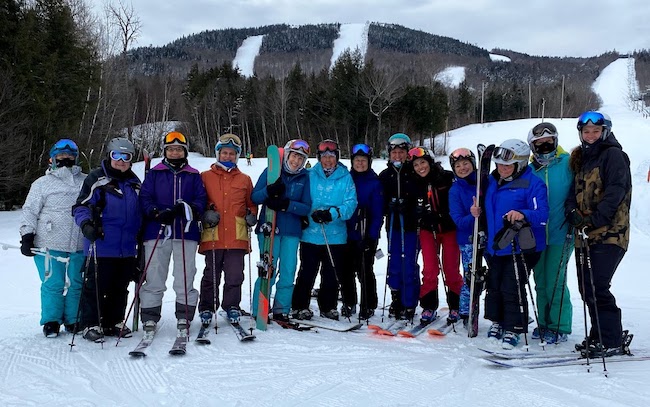 So what better to bring to a gathering of Ski Divas than a new women’s ski: the Earhart 88 from Renoun. Actually, it was pretty brave on my part. What if the Earharts didn’t work out? What if I couldn’t keep up with everyone else? Just to be safe, I stashed a back-up pair of skis in the car, ready to step in if the Earharts were a total bust.

Turns out this wasn’t necessary. The alternates never came out to play (and I love those skis, too).

In case you’ve never heard of Renoun Skis, let me give you some background: Renoun is a small company headquartered in Burlington, VT. What makes them different from anyone else is their use of HDT, or hyper-dampening technology. You know how skis tend to chatter  at high speeds, or over terrain that’s unforgiving, such as ice and hardpack? HDT makes use of a non-Newtonian polymer that adjusts in real time to the skier and snow conditions. Put simply, when you ski on a stiffer surface, the ski becomes more rigid and damp. And when conditions become more forgiving, such as powder, the ski becomes softer, less damp. Instantly.

For a small company, Renoun has attracted some pretty big accolades. In 2015, Renoun  captured the coveted world-class ISPO GOLD Award in Munich, Germany, in recognition of its pioneering technological design. And in December, 2015, the New York Times put it on its list of the year’s hottest ski gear.

So why did Renoun introduce a woman’s ski now?

Renoun’s been around since 2011, and its main focus has always been men. But with growth came a decision to make the brand less male-centric. “Originally we were going to work on making the brand more middle of the road — adding more photos of women and tweaking the color palette, which was very dark and ominous — to make us more approachable to women,” said Cyrus Schenck, company founder and president.  “However, Rhiana, our female operations director, pointed out that rather than basically giving the website a face-lift and doing lip service to women, we should make a women’s line instead. So that’s what we did.”

The development process involved getting feedback from a wide range of female skiers — everyone from racers to recreational skiers who ski only a few times a year. Cyrus noted that all the skis were tested blind, so no one knew which ski or construction and/of shape they were on. “Only after everyone skied them a few times did we reveal which ski was which. Sometimes we were very surprised by the reactions, and sometimes not at all. The most important element for us men was to stay out of the discussion. To make sure we stayed neutral, we never even rode the skis. We wanted to understand the feedback without bias. Rhiana was the lead-point on many of these discussions as she actually skied them and was pivotal in translating the feedback as it pertains to the Renoun brand. In all, it was the most tested ski we’ve ever produced.”

Now a bit about me.

I’m 5’1″, 112 lbs, and a fairly aggressive advanced skier. I’m not the best skier on the mountain, but I’m far from being the worst. I ski around 90 days a year, primarily in Vermont, which means I see it all: a lot of ice (AKA hard pack), packed powder, sometimes powder on top of ice , and once in a while — but not too often — some actual powder.

As for reviewing skis, well, to be honest, I’m not that sophisticated. You know those reviewers who go on and on about torsional stiffness and other technical aspects?  That stuff pretty much eludes me; I’m just not technically oriented. Come to think of it, though, this may make me a perfect ski reviewer. Because I’m probably like most people. I know if I like a ski and I know if I don’t. And bottom line, that’s what really matters.

First, the name: Earhart. As in Amelia Earhart. How fitting is that? I mean, this woman was as bad ass as you could get. A woman pilot in the 1930’s? Who tried to fly solo around the world? I rest my case. What’s more, the aero theme is more than fitting. Who doesn’t want a ski that makes you feel like you can fly? So yes, I approve.

Second, the graphics. For some good skis, Renoun has been seriously deficient in the top sheet department. The Z-77’s and the Z-90’s frankly look like they were designed by engineers. Which they were, but that’s beside the point. Anyway, with the Earharts, Renoun finally has an attractive pair of skis in its mix.

See what I mean? 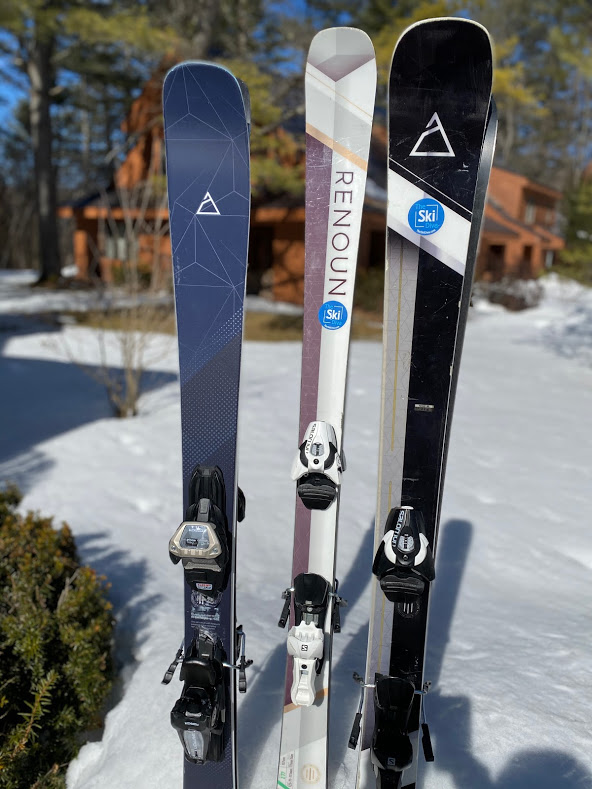 Profile:
Camber with a bit of tip and tail rocker, but nothing crazy.

So how’d they ski?

Sunday River was a perfect place to demo skis. The terrain is nicely varied, and we had just about every type of condition imaginable: A couple days of hard pack and wind-scoured ice, followed by a warm up with soft, spring-like conditions.

I skied the Earhart in a 156, and my first impression was man oh man, these are light skis. In that length, the Earharts weigh only 1,350g per ski (that’s just under 3 pounds). To be honest, this took a bit of getting used to; I’m more accustomed to a ski with a beefier feel. But once I skied them a bit, oh, mama! There’s no going back. The light weight makes them incredibly quick — easy to turn and maneuver, with a playfulness that’s just plain fun. But the low weight doesn’t come with any sacrifice in stability. The company says HDT reduces vibration by 300%. I don’t know if that’s the exact number, but I will say this: these skis provide a nice, smooth ride in all sorts of conditions. You don’t get bucked around, and you don’t feel chatter. I had them on groomers, ice, trees, bumps, soft snow, packed powder, and they performed equally well in all. There’s a tenacious edge hold on ice, but a nice, buttery feel on softer snow, too. What’s more, the 88 waist is perfect for most east coast conditions, the tail rocker makes them release nicely in the bumps, and the tip rocker gives you the lift you need for softer snow. 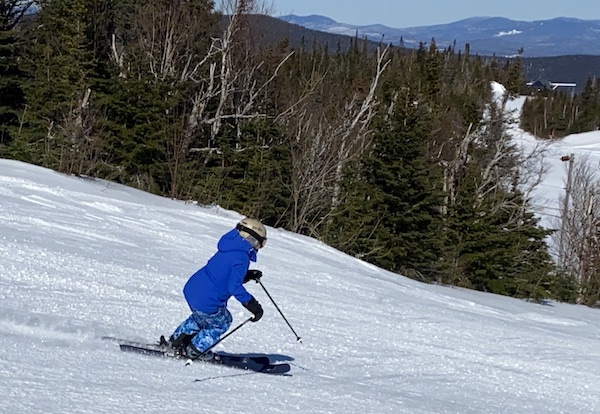 If all this intrigues you, here’s a head’s up: you can’t get the Renoun Earhart in a store. Actually, you can’t get any Renoun ski in any store. They’re only available on line at the company’s website. So what’s a skier to do?

Order them. Because if you don’t like them for any reason, there’s a Moneyback Guarantee, which lets you ski them a few days (within six months of the original purchase date) and send them back for a full refund, or swap them out for another size, if you prefer. I don’t know any other ski company that does this. You have absolutely nothing to lose.

I think the Earharts are a ski that Amelia would be proud to have as her namesake. Like her, they fly. Bottom line: you will, too. A great all-mountain ski, particularly for you east coast Divas.

It’s summer. Here’s what you need.