Why are lift lines so long this year? 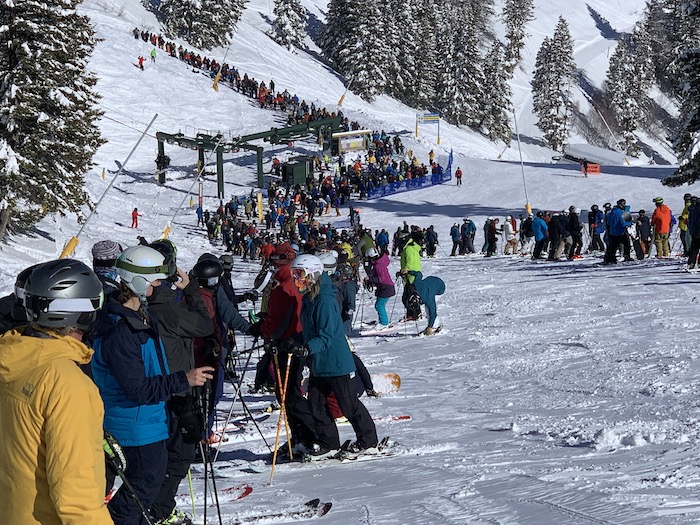 I’m sure you’ve noticed the lift lines this year. I ski exclusively during the week, and even then it’s been crazy. There are some lifts I won’t even go near because the lines are just too long.

Sure, I know it depends on where you ski. And when. There are many, many places where you can enjoy the day with little to no lift lines. Most of these are smaller, indy resorts, where crowds are rarely an issue. But at the larger resorts, even with COVID capacity limitations in place, lines can be pretty insane.

Is it worth complaining about? In all honesty, no. With the pandemic still raging around the world, we’re lucky to even be skiing this year. Other countries have shut down skiing entirely, so waiting in a lift line seems pretty small potatoes.

Long lift lines are nothing new. In February, 2020, I wrote a piece called “Are We Loving Skiing To Death?” , where I discussed the long waits we were seeing then. And that was before COVID. But wasn’t the pandemic supposed to mean fewer people skiing? And wouldn’t that result in shorter lift lines?

So why has it gotten so bad?

Rather than making lift lines shorter, the pandemic has instead done exactly the opposite, with a number of factors coming together to create a Perfect Storm of Congestion.

• It’s the passes. In the past, the cost of a lift ticket or season pass could be a major deterrent to someone who wanted to ski. It’s one of the things that’s consistently kept people away from the sport. But with a wave of their magic wands, Vail and Alterra have turned things completely around. By any measure, the multi-resort passes are a bargain. If you bought the base IKON pass in the spring, for example, you paid just $649. for an adult ticket. This gave you unlimited skiing at 14 destinations and up to 5 days at 27 additional mountains (yes, there were a few blackout dates). The EPIC pass, though more expensive, was similarly a great bargain: $979 for access to 43 North American resorts, as well as a handful in Europe and Australia. When  you consider that a single day lift ticket at many resorts can be $200 or above, that’s an unbelievable savings. And while neither Vail or Alterra releases many details about pass sales, last year Vail said it sold more than a million EPIC passes for this winter.  That’s a lot of people skiing.

But there’s more to it than just economics. With the reservation system in place, many resorts promised to give priority access to pass holders — a further incentive to buy a pass.

• Reduced Lift Capacity: It’s simple math. Because of COVID, we’re not packing ourselves onto chairlifts the way we used to. So when a lift that’s built to carry four or six people is taking only one or two, the lines are bound to get backed up.

• Good snow: After a slow start in many parts of the country, some places are positively drowning in snow. In late January, Tahoe had a massive storm, receiving up to nine feet of snow in some locations. Mammoth, too. New England is having an excellent year. All this creates an incredible amount of excitement, especially when there’s not a heck of a lot else to do.

• Greater flexibility: Thanks to the pandemic, there’s been a huge change to the way we work and go to school. A lot of schools are teaching remotely or scheduling extra-long breaks. And many of us are working from home instead of going into the office. For some, that means greater flexibility to do what we want when we want — and that includes skiing.

• People are coming to ski country. And they’re not leaving: This is definitely true here in Vermont. Second home owners from out of state have moved in, at least temporarily, to escape the higher COVID rates elsewhere. Since they’re already working remotely, this isn’t a problem. Skiing is more accessible, and they’re taking advantage of that.

• Skiing is one thing you can do now without much risk of infection: There’s a lot you can’t do this year. Anything that takes place with groups of people indoors is pretty much off limits. Concerts, sporting events, parties — forget about it. But skiing is different. You’re outdoors, physically distant from one another. And you can do it with friends, provided you stay far enough apart.

• Many of us aren’t flying: This especially applies to those of us in the East. Instead of flying out West to ski, or maybe heading to the Caribbean for a mid-winter break, we’re vacationing someplace we can reach by car. Most of the ski areas in the East are within five hours of a major population center, so a ski trip is an easy, doable alternative.

How to avoid the lines.

If you want to ski at a larger resort during a weekend, there’s little you can do. You just have to accept the wait for what it is. But there are some things you can do to get around the horrendous lines:

Ski at a smaller, independent resort. One that doesn’t accept the Epic or Ikon pass. (Believe it or not, there are a few that exist).  You may not get the gnarliest terrain or the longest runs, but that doesn’t mean you won’t have a ton of fun.

Learn the lifts. Wherever you ski, there are bound to be one or two lifts that get more traffic than others. These are usually not the high speed express quads or the gondolas that take you to the top of the mountain Try to stick to these as best as you can.

Is this the new normal?

Could be. Remote working may be here to stay. And the multi-resort passes don’t look like they’re going anywhere, either. But as the pandemic diminishes, people may find themselves going back to other activities instead of spending time on the mountain. We’ll just have to wait and see. 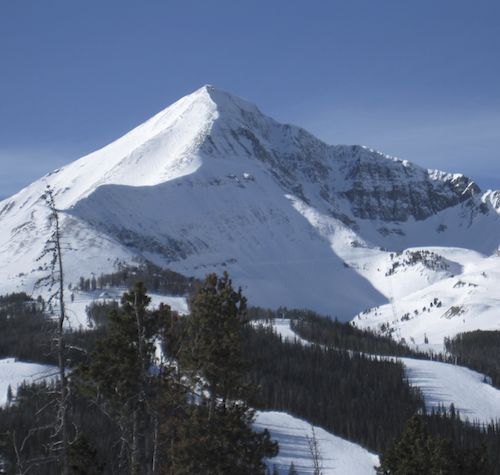 Will the economy effect your skiing next year?

With gas prices as high as they are, and inflation a real factor in our lives, will your skiing change next year? What do you think? [...]

Should ski resorts offer a 'pay-per-lift ride' option for guests?

With single-day tickets at some American resorts priced at $200 or more, what would you think of a 'pay-per-lift' ride option? Throughout the day, you'd ride the lifts you want… [...]

Save up to 70% on handpicked deals at REI Outlet with more styles added for you to shop. Click here. [...]