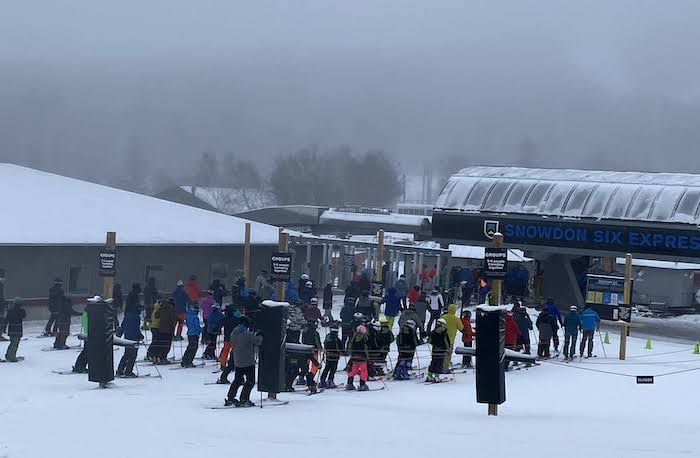 I can’t believe I even have to write about this, but it seems like many of us need to be reminded about how to behave in a lift line and on the chairlift. Maybe I’m old and cranky, but I think I’ve seen more bad behavior in recent years than in all my ski years put together. Could be crowds are bigger, or maybe some people just don’t have a clue about what to do, or maybe some don’t care enough to consider the impact their actions have on anyone else.  Nonetheless, I think many of us could use a quick refresher on lift line (and chairlift) do’s and don’t’s. So here goes.

On the lift line.

Don’t ski in hot. When you’re approaching the lift line, s-l-o-w down. Imagine your grandma’s  standing there holding a tray of eggs, and she can’t move aside very quickly. Seriously. I’ve seen far too many collisions and near-collisions. There are a  lot of people standing around, so check your speed.

Don’t enter the lift corral until your entire group is assembled. This should be self evident, but lots of people get in the corral and stand there waiting for someone else to show up. It blocks the line and slows everyone down.

Have your pass ready. Don’t go digging around in your pockets at the last minute. Find it first. Also, make sure your pass works before you get in line. If it’s an RFID pass that’s being auto-scanned, make sure you don’t have anything in your pockets that can interfere with the scanning process. If it’s being scanned manually, indicate to the scanner where your pass is located (chest pocket, sleeve pocket, etc) so they can find it quickly.

Don’t step on my skis! I paid good money for them and don’t want anyone else to scratch them up, thank you very much. Sure, this can be difficult when we’re all crammed together, and yes, accidents happen. But do your best. Stay aware of where your skis are so they don’t end up on top of someone else’s.

Remember to merge. We all  learned this in kindergarten: Take turns. This isn’t hard if there’s someone around to direct traffic, but that’s not always the case. When it’s not, alternate. First one group goes, then another.  Pretty basic stuff.

Pay attention to the liftie. If they give you directions, follow them. And don’t give the liftie grief. Be polite. He (or she) has it tough enough already, standing out in all types of weather for not a lot of pay. So be patient, be nice, be polite. Don’t blame him for the crowds or for the weather or for the speed of the lift. He’s just trying to do his job.

Ask before you lower the bar. For some reason, people have very strong opinions about whether the safety bar should be up or down. Here in Vermont, the decision’s already made: State law says it has to be down. But in some places,  it’s up to you. So if you do lower the bar, the polite thing is to first ask your seat mate if they have any objections. If they do, keep it cordial. Try explaining why you want it down (for example, “I’m really afraid of heights”). If they’re not a total jerk, they’ll let you lower it. If they raise a stink, well, you’re kind of stuck. If you do lower the bar, make sure everyone is sitting back so you don’t clonk anyone on the head. By the same token, don’t raise the bar three lift pylons before you get off. I mean, what’s the point of having it down in the first place?

Same with the bubble. If you’re riding a bubble chair, asking whether or not you can lower the bubble is hugely important. As someone who’s worried about Covid, I don’t bring it down. I don’t want to be sitting in a contained little area with anyone other than my immediate family. So if someone wants it to remain up, be respectful and honor their wishes.

Don’t smoke, toke, or vape. It’s unpleasant and not appreciated.

Don’t swing your legs, Omigod I hate this. It shakes the entire seat, and I’m always worried someone will clonk down on my skis, sending them skittering into the abyss below the lift.

Be polite. This seems very simple, but a lot of people need reminding. We’re all in this together. We all want to get to the top, we all want to have a nice day. So don’t make it miserable for somebody else.

And when you get off the lift, don’t cut directly in front of them. If you’re crossing right in front of them, say so.It prevents accidents so we can all have a nice day. 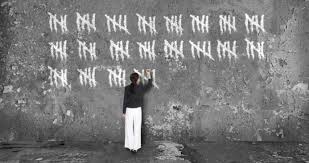