Hi all! Hello from Stratton opening day! I fully expect it to be madness!
Quick question - for those going to the killington cup on Sunday - what time are you planning to show up? I’m thinking between 7:30 and 8. Will that be too late? Any tips on which lots to park in? The paid event parking is sold out. Thank you.

No advice but I am so jealous and would love to hear about it! I have traveled to US and Canada World Cup races and would love to attend this, especially in the Mikaela era, but air travel over the Thanksgiving holiday is a nonstarter for me. If they'd only move it out one week I'd be there.

Will report back! Fortunately it was just a drive for us.

Quick question for Killington regulars. Since we do t have the paid deluxe parking - is there a specific area you would recommend I park? I know the area is very big - what location should I indicate on the GPS? Thank you!

Good morning! We ended up parking in the starship base area - I hope this is a good spot! On a bus to the base now. I hope we are good on time. Super excited.

woohoo! Secured prime spots at the top end of the bleachers (non VIP) and enjoying the nice weather and festive atmosphere! The crowd is not as bad as I expected - maybe most people are coming later. They have some nice merch for sale - will have to check it out later. The new lodge looks nice but it isn’t done yet. This place is massive. It’s our first visit here and the whole place is so intimidating! I’m looking forward to exploring the place more and coming back to ski another weekend

About 30 min before the start the stands start to fill. Still glad we came early. And have tickets for the stands. General admission is kind of just a standing crowd. Brought breakfast, devices, and everything to keep warm. Starting soon

We had the most amazing time! Really enjoyed! The second round was particularly exciting! We had a fantastic view and we’re very comfortable. The weather held until the very end before it starts to drizzle. Definitely want to do it again!

The kids really enjoyed the cowbells!

Ok clearly I have no idea how to post pictures properly. I swear they are right side up on my phone

Looks and sounds like an amazing time! I haven’t been for a race, but would like to sometime in the future.

In two weeks I'll be in a group of instructors skiing Killington Mon-Fri.

This week is ProJam, the largest PSIA annual event for instructors in the country. It's a week of training and fun with high level PSIA instructors teaching groups of lower level instructors.

My group will ski Superstar multiple times daily. The trail will be covered with blown snow on top of the race course's injected ice, but it's never very deep. Superstar is notably steep at the top, then there's a mountain road which crosses it that is totally flat. The shift from skiing down that steep drop to skiing across the flat mountain road can catch one off guard and cause a face-plant if you don't prepare for it. Then Superstar turns into a gentle low pitch trail for a bit. That's when the teaching/training happens. Then, half way down, Superstar steepens back up for the rest of its length until it abruptly ends near the flats in front of the new lodge and the lift. By that time you're warmed up and ready for the icy steepness. Hopefully.

My group will also ski Skylark, next to Superstar, multiple times all week long. It's not as challenging as Superstar, but it has a steep, usually very icy, section at its bottom. Both these groomed trails tend to be hard, firm, icy New England blown snow when we get on them in early December.

Superstar's steep headwall can be quite the challenge for those not used to real steeps (me). And so much snow will have been blown on that trail to get it ready for the WC races that just happened this weekend that when you get off the lift you have to side-step or herringbone up a notable distance to get to the top of the run. I tend to get out of breath getting up there (age). Then you get to stand there and look down that headwall, thinking about how you're going to handle it. Or if you're going to bail and go ski Skylark. That is frowned upon in my group.
Last edited: Nov 27, 2022

That was new to me too! I was fortunate to be sitting beside a nice lady ski racer who explained to me that they on purpose make the surface very icy for races. Hard no for me! I’ll see you at the waffle cabin.

Btw - if anyone plans to come in the future - lots of folks brought blankets and foam pads and taped them into the benches to save their spots - so they could come and go from the stands. Also to keep them warmer as the bleachers were very cold. Mental note to do that in the future. But really the weather today was perfect. Really can’t complain.

Here's the last pitch of Superstar with a racer on the course. I don't know what year this was but it's from a WC in the past, not this year. Looks like a great time! And you got to see something pretty cool, since Wendy Holdener, who had 30 slalom podiums but no wins, FINALLY got one. Though she had to share.

Sounds like the event was a smashing success. Ticket sales raised $650,000 for the non-profit foundation that gives grants to encourage participation on snow in the northeast. 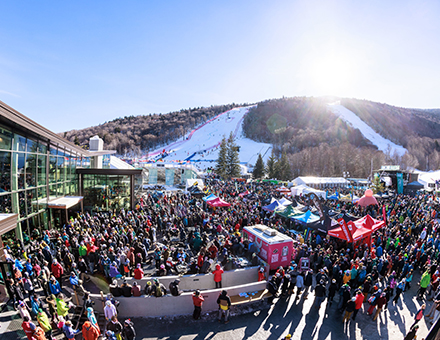