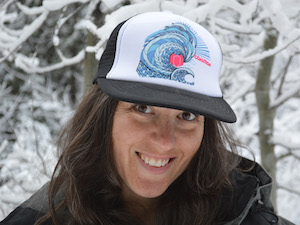 How many of you ski on women’s gear?

[Looking at you through your screen]

I see. A good number.

If I’d asked this question not more than a decade ago, I think very few of you would’ve raised your hands (or nodded. Or at least said to yourself, ‘me.’) But today, many ski gear manufacturers offer dedicated lines of skis just for women.

But perhaps not long enough. Because even though the Snowsports Industries of America reported that women were responsible for nearly a third of the $3.4 billion spent in retail in 2011-12, some companies still consider women a secondary market.

Not so at Coalition Snow, a new ski and snowboard company that’s not just run by women; it makes skis and snowboards exclusively for women.

Get a load of their tag line:

“We’re the ones we’ve been waiting for,” a Hopi Indian quote that exudes confidence, moxie, and a determination to take charge of one’s own destiny.

Kind of says it all, don’t you think?

SD. So tell, me Jen, what gave you the idea for Coalition Snow? How’d you get started?
JG. I was on a backcountry ski trip in 2013 and talking with friends about women’s skiing. This was about the time that Pretty Faces [the Lynsey Dyer all-female ski movie] was getting started and there were a lot of conversations about how women’s gear doesn’t meet the needs of more advanced women skiers and riders and how that can hold women back. We were saying, oh, wouldn’t it be great if someone would make gear that women like us would want to use, because so many of us use men’s gear. As with many things in life, you can’t wait for someone else to come along and do it for you if it’s something  you want; you have to create it yourself. When we got home I started emailing friends and talking to them about what they thought about this idea: a company of women making skis and snowboards for women. We had a terrific response, so we decided to go forward.

SD. So your decision was based on a general dissatisfaction with the women’s gear that was already on the market?
JG. Yeah. Most women’s-specific gear is kind of shoddy and soft and built around this idea that women don’t have enough strength to turn skis or boards. That might be the case for some women, but basing equipment on the idea that women aren’t powerful doesn’t do women any favors. I’ve been living in Tahoe for about 12 years, and most of the women I know are on men’s skis because they have the right stiffness and flex and you can find a more aggressive ski. The problem is often it’s not the right length. So we set out to design skis and snowboards that are a more appropriate length for women, though I do think our stuff is a little bit longer than some women might’ve been told they should be skiing on. The flex pattern is also much stiffer than most women’s skis.

SD. What goes into the design of your skis?
JG. There’s no peer review study or literature that talks about how women skis are designed differently. It mostly comes down to where the bindings are placed, so we came at our design from what makes a women’s ski so that women would want to ski on it. We did a ton of market research, both formally and informally, to find out what women want and based our design on that. Last year was our year for testing, prototyping, and research and we went into production this summer so we have a limited edition line: a powder ski, an all mountain ski, and all mountain snowboard. All that info is on our website.

SD. Can you tell me about your skis?  What makes them different from other women’s skis out there?
JG. One of the things is length. Both our skis are 173. We really believe that 173 is a good length for many female skiers, unless you’re a real expert or really petite. We also designed the ski to have a rockered tip and tail, so the amount of edge that comes in contact with the snow is a lot less than 173. We figured if we make really short skis, we’re perpetuating the idea that that’s what women need. But what we found in our testing was that even women who were used to shorter skis became better skiers once they got on ours. Yeah, there was a short learning curve. But it actually helps them progress.

So both our skis are 173 with a rockered tip and tail, multiple radius side cut, camber underfoot. They’re really good in transitioning from the pow to the crud to the groomers. We went with a full birch core, because that provides a good amount of stiffness, and one of the things we learned last year was that women’s skis were flimsy and that the tips would go down. We went with a stiffer ski because it would hold up better at high speeds and initiate turns better. 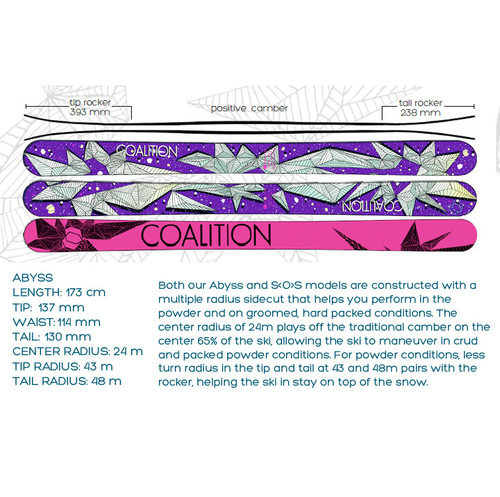 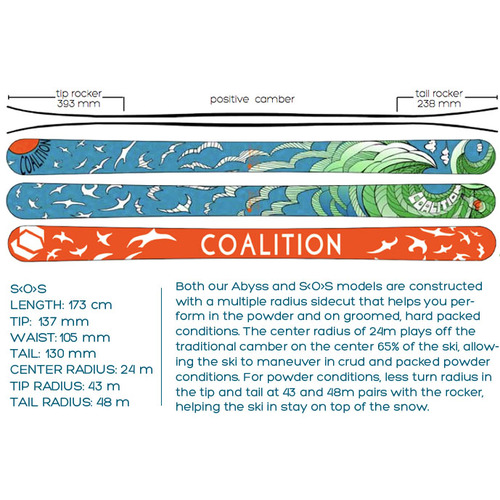 SD. I have to say I love the graphics. One thing that drives me nuts about women’s skis is when they have all the pretty little flowers and butterflies.
JG. Our artists are women, too, and no, not everyone wants pink flowers. But a lot of women don’t want the grim reaper or the skulls and crossbones you’ll find on men’s skis, either, so we went somewhere else.

SD. Where are your skis being produced?
JG. We’re working with a factory in Japan, and we’re selling them directly from our website as well as through many online retailers.

SD. How’s response been so far?
JG. It’s been amazing from both men and women. We’re not about eliminating or excluding men. They’re a part of what we do. And men who get it – who want to see women thrive – really appreciate our skis. There’s been an outpouring of support from women who I think feel like they’ve been ignored or marginalized by the industry. Let’s face it, the industry is predominately male. People don’t change unless they have to; the status quo has been working very well for the industry, but I think energy has grown around women being perceived in a different way. Women have been demanding that.

Women have been incredibly supportive. For the most part, everyone has been excited and that’s what’s kept us going. About once a week I get an email for phone call from some stranger who says, “We’ve needed this for so long, we’ve been waiting for this.”

SD. How can someone go about demoing your skis?
JG. We have demos available in a few shops in Truckee. We don’t have any demos outside of the area because this is our first year, but if there were shops that were interested, I’d be happy to talk to them.

SD. It’s amazing no one’s done this before.
JG. I think the reason is that we’re told it’s going to fail.  Lynsey Dyer said that about Pretty Faces. She was told over and over that there wasn’t a strong enough market. The data speaks otherwise. If you look at the data about women’s participation,  it’s on the rise in every single category, so I don’t understand why people feel that way. I think running a business is difficult, especially if you’re getting into a business like this. There are so many challenges. I think it’s definitely the right time to be doing this, and I think that being told you’re going to fail makes people not want to do it.

SD. What do you think has been your biggest challenge in getting this off the ground?
JG.I think we’re in the middle of our biggest challenge right now. We’re lucky in that we have really good relationships with people who have been in the industry for a really long time, so we’re getting some good advice. But right now, we’re trying to determine if all that support is going to translate into sales. The only way we’re going to be viable is if people buy our skis. It’s sort of like a big social experiment.

SD. So what’s in the future? Do you plan to expand your line?
JG. We’re actually working on that right now. We’re looking to add some longer skis, one with a narrower width, like a front-side ski, also a powder board. We’re doing research right now to figure out what we’re going to produce.

Women wonder why they’re not getting better at skiing. Well, it’s because your gear sucks. You need gear that’ll help you progress. There’s a reason you can’t keep up with your husband or your boyfriend. So we aim to change that. 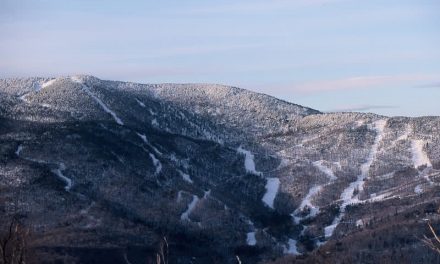 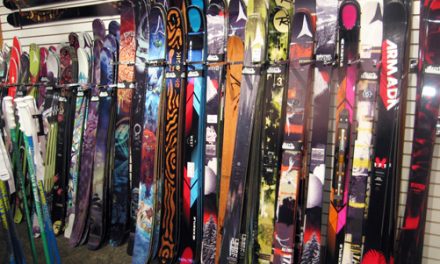